Winning the TCO Finals can be life changing and this year the Algorithm Competition is even more fierce!

The competitor with the most TCO points from each online stage, the advancers from online round 4, and the advancers from the online wild card round will win a trip to the Tournament to compete in the Onsite Finals of the Algorithm Competition.

Competitors must be Topcoder members. There will be no additional registration required to compete in the Algorithm Competition.

Structure of Competition Rounds and Matches

Each Round and each Stage of the Algorithm Competition consists of one or more separate Matches. Each Match consists of three phases: Coding Phase, Challenge Phase, and System Testing Phase. The format of these Matches is similar to the format of Topcoder Single Round Matches. The rules in place for Single Round Matches as of October 1, 2019 will also apply to the matches in the online rounds of the Algorithm Competition. The same rules will apply to the matches in the onsite rounds, with the only exceptions being a different length of Coding and Challenge Phases.

The Coding Phase is a timed phase in which all Competitors are presented with the same three questions representing three levels of complexity and three levels of potential points. Points are awarded for each problem upon submission of a solution that successfully compiles. Points are calculated on the total time elapsed from the time the Competitor opened the problem until the time the Competitor’s successfully compiling submission was submitted. During the Online Rounds, the Coding Phase will last 75 minutes. During the Onsite Rounds, the Coding Phase will last 85 minutes.

Before the start of each round, the Competitors will be randomly assigned to competition rooms. A Competitor is only able to challenge the solutions from the same room into which he/she is assigned. Each competition room will have a maximum of 25 Competitors.

The Unused Code Rule is in effect for all Online and Onsite TCO rounds. This rule is a policy against including extra content into a submission that is not a part of the solution of the problem. For detailed description of the rule, please refer to chapter 8 here.

During each Stage, Contestants who participate in Tournament-eligible Algorithm Matches on the Topcoder website will receive TCO points for that Stage as outlined in these Rules. 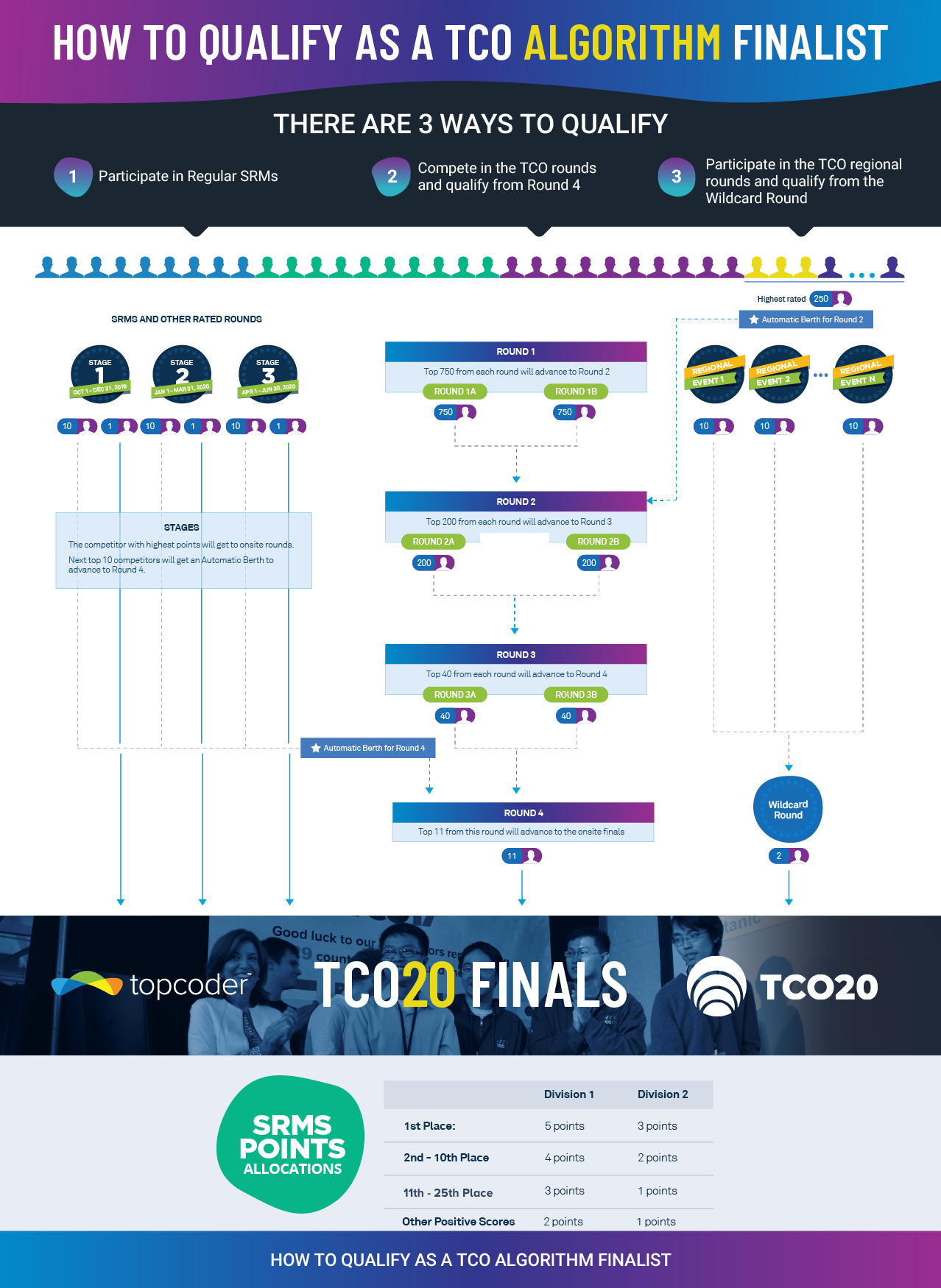 Competitors will receive TCO points for their placement in each Tournament-eligible Match in which they participate:

Advancing from the Online Stages

In the event of a tie for any advancing position during the Online Stage, the tie will be resolved in the following manner:

In the event that a Competitor who has advanced to the onsite Championship Round is unable to attend it, Topcoder may choose to replace this Competitor with another Competitor or to take no action in this regard (thus reducing the total number of onsite Competitors). The choice is made at Topcoder’s sole discretion. In case of replacement choice, the right to attend is passed to the next Competitor who have accumulated the most points during the Online Stage.

Automatic Berths – The 250 members who have the highest Algorithm competition rating as of April 16 12:00 UTC -4 and who meet all of the following criteria will receive an automatic berth into Online Round 2:

All Competitors who do not receive an automatic berth and who meet all of the Algorithm Competition and Tournament eligibility criteria can compete for one of the remaining 1,500 spots in Online Round 2. Two (2) Matches (Match 1A and Match 1B) will be held in Online Round 1. The highest scoring 750 Competitors from each of these matches will advance to Online Round 2.

In case of a tie for any automatic berth into Online Round 2, each tied member will receive an automatic berth. Additional automatic berths awarded this way don’t change the maximal number of Advancers from Matches 1A and 1B.

The schedule and details of the Online Round 1 are as follows:

The schedule for the Online Rounds of the Algorithm Competition is as follows:

** The competitors eligible to compete In Online Round 4 include 30 advancers from the Online Stages.*
All times listed in UTC -4

Up to five (5) Onsite Rounds will be held around the world at TCO19 Regional Events. Competitors wanting to compete in one of the onsite regional rounds must be present at the event and bring their own laptop to compete. The top 10 scores from each Regional Onsite Round will advance directly to the Online Wild Card Round. Regional event dates and locations will be announced at a later date.

The number of onsite regional rounds is subject to change.

Once all the Onsite Regional Rounds are complete, there will be one Online Wild Card Round. The two (2) highest scorers from this round will win a trip to compete in the Onsite Finals.

In each Online Round Match all Competitors are ranked according to their scores after the System Testing Phase. The specified number of Competitors with the highest scores advance to the next Round. To be eligible to advance from an Online Round Match, the Competitor must finish the Match with a point total greater than zero.

In the event of a tie for any advancing position other than a spot in the Onsite Finals, all tied competitors advance to the next Round and the number of eligible Competitors for that Round will be adjusted accordingly.

In the event of a tie for any spot in the Onsite Finals, the tie will be resolved in the following manner:

In the event of a tie in a Semifinal Match, all tied Algorithm Competitors will advance to the Championship Match.

In the event of a tie in the Championship Round, the prize money will be distributed equally (rounded down to whole dollars if necessary) among the tied Onsite Algorithm Competitors.

Winners must be present at the onsite Awards Presentation to receive the prize.

The Algorithm Competition will also award prizes in the form of T-shirts (at most one per Contestant). T-shirts will be awarded to the following Contestants:

These rules may change at any time with or without prior notice.